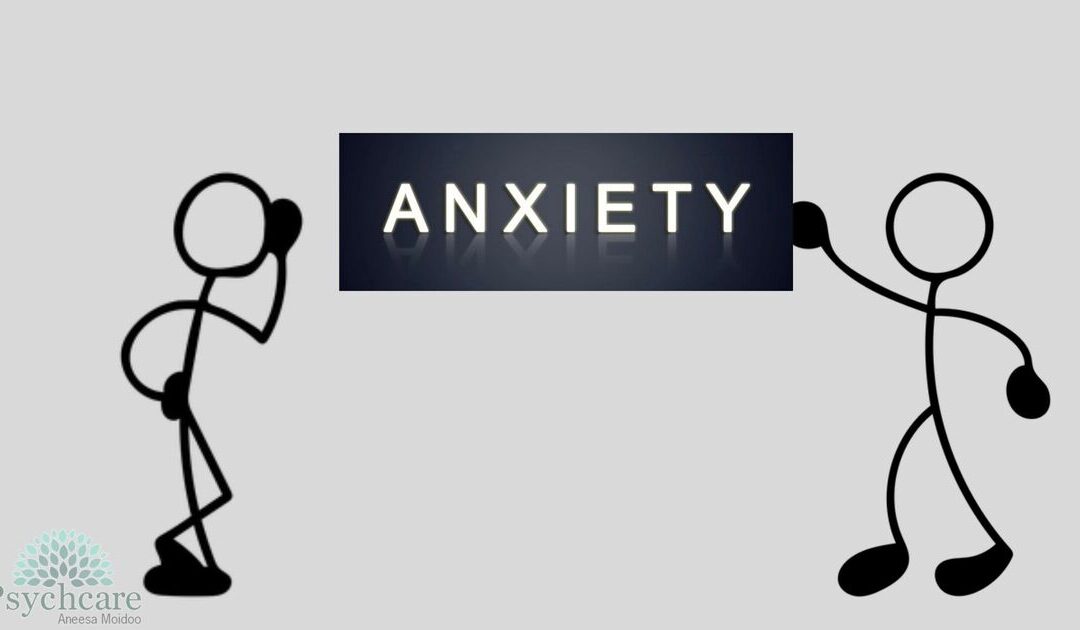 Anxiety is the body’s natural response to stress. It’s a feeling of fear or apprehension about the future. Starting something new, preparations, plannings, can make anyone nervous and anxious. Similarly, talking to the public, meeting people, voicing out opinions, facing interviews, etc can be anxious-prone. Also, a sudden change, job loss, unstable relationships, loss of close ones also trigger anxiety.

Anxiety is seen as a problem if it stays over 3 months and takes a toll on functionality. Anxiety shows up in many ways. A few that we can observe in ourselves and others are

Not being able to work of his/ her potential due to restlessness, Inability to focus, Lack of concentration.

Thinking too much about the future, connecting thoughts with the past experiences you had or the experience your close or known people had, anticipation of thoughts like what if that happens to me; are thoughts that swallow us. Consequently, these thoughts take us away from the present and rationalize the situation.

Can anxiety be completely avoided?

Anxiety is not something we can eliminate. It’s not only that it’s not always problematic. But proved helpful. Anxiety, to an extent, assists in preparations, plans and foreseeing. However, due to the vigilant nature of anxiety, we tend to be in constant checks and stops from taking the slightest risk or be in tiny discomfort. To emphasize, the concern is how bad is it affecting the person.

Adding to the point,  anxiety is a  default human setting.  It is instilled from the birth of an infant. It’s because of that, the first cry of the infant itself is anxious-prone. The infant feels anxious with the exposure to the new environment, where all the comfort of the womb ends and the infant enters into the anxious phase

Anxiety is an emotional problem where thoughts become uncontrollable and affect feelings. It affects many areas in the form of

Generalized Anxiety Disorder: The symptoms include

Panic disorder:     A form of anxiety where the individual has recurrent unexpected panic attacks. this is caused due to the sudden intense fear that hit quick and reaches its peak in minutes. Attacks occur unexpectedly or can be brought on by a trigger, such as a feared object or situation.

Panic attacks are more or less experienced as:

The panic disorder often causes worry about the next attack that can happen so actively. Hence tries to prevent future attacks by avoiding places, situations or behaviours associating with panic attacks. Due to the unpredictability nature of attacks, a tendency to be in constant check and guarding is seen. The worst condition of these attacks and avoiding can lead to the development of agoraphobia.

It is an intense fear of—or aversion to—specific objects or situations. Although it can be realistic to be anxious in some circumstances, the feeling of fear is perceived more than the actual situation or object.

In addition, there are other types of phobias and phobia-related disorders. This includes the fear of

Social anxiety disorder:    It’s an intense fear or anxiety towards social or performance situations. The underlying worry is the actions or behaviours associated with anxiety will be negatively evaluated by others. In other words, the fear of being judged. This worry often leads to avoiding social situations. Social anxiety can manifest wherever you are exposed to people around you, regardless of familiarity. Unfortunately, this is seen widely.

Another not common but recently seen is Agoraphobia. It is an intense fear of two or more of the following situations:

People with agoraphobia often avoid these situations partially because they think leaving a comfortable place is difficult or impossible. In addition, they can experience panic-like symptoms or other embarrassing reactions. In the most severe form of agoraphobia, an individual can be housebound.

Selective Mutism:  A somewhat rare disorder associated with anxiety is selective mutism. This occurs when people fail to speak in specific social situations despite having normal language skills. Selective mutism usually occurs before the age of 5 and is often associated with extreme shyness, fear of social embarrassment, compulsive traits, withdrawal, clinging behaviour, and temper tantrums. People diagnosed with the same are often also diagnosed with other anxiety disorders.

Fear and worry about health is another type of anxiety. Always worried about illness, any mild physical discomfort is a red flag, constant unwanted checking for hints and clues in the body are a few signs of health anxiety.

Obsessive-compulsive disorder is a variant of anxiety, where the thought takes control of the body and mind with recurring thought patterns. The anxiety can be seen in behaviour, by doing things over and over again. the anxiety keeps them on the go.

Post-traumatic stress disorder (PTSD): is a condition where the individual has anxiety due to past prolonged painful incidences. Because of that, anxiety can get triggered easily.

Anxiety can be different depending on the person experiencing it. Feelings can range from butterflies in your stomach to a racing heart. You might feel out of control like there’s a disconnect between your mind and body. Anxiety can be experienced with fear of certain places, fear of being stuck or trapped, high, closed places, animals etc

A few commonly seen symptoms of anxiety are:

How to tackle anxiety

There are few steps we can look into. To start with, the recurring automatic thoughts are just thoughts. It’s always far from the present situation. Hence the fact or the possibility of anxious thoughts happen has no existence. Thoughts merely stay in the minds. changing and reorganizing routines and watching out the social circles engaged can fade mild symptoms of anxiety. Furthermore, consulting a psychiatrist, or a psychologist is an option to alleviate symptoms.